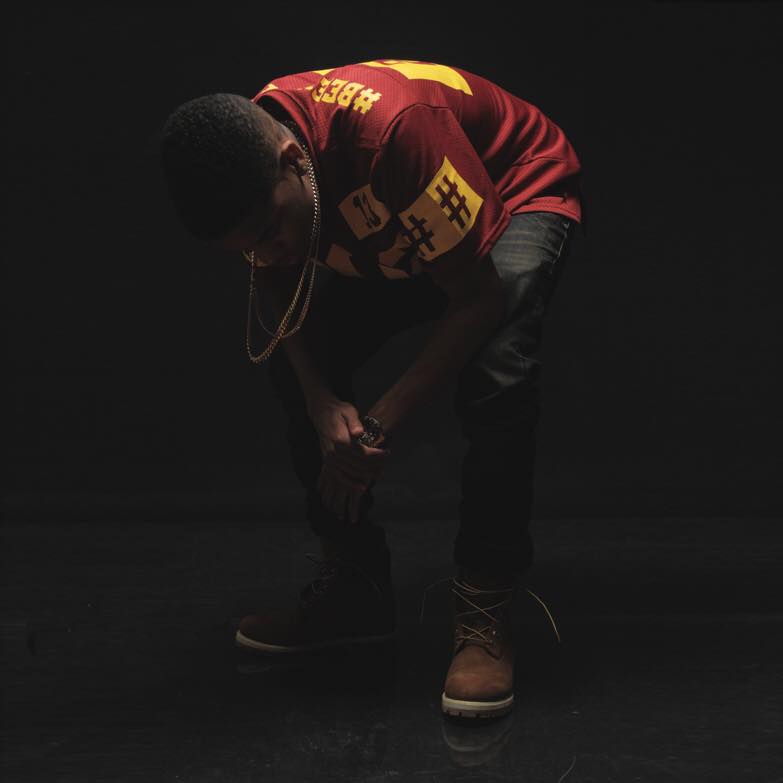 Check out my son Kywuan’s [@KyleeBDMG] new post “The Mic Is My Savior.” My 19 year old has a passion for music and he wants the world to know it! Ky, I am so proud of you! @jamilatdavis

“Turn my headphones up!” I speak affirmatively into the Bluebird recording mic. I hear the sound waves of the instrumental banging in my ear. My adrenaline begins to pump excessively as I’m eager to show off my extensive word play to my friends and the recording engineer. The room is completely silent; I could’ve sworn that I had a spotlight above my head, the way everyone’s eyes were set on me. As my words started flowing, I knew they could hear the pain in every sentence. As I fade in and out of my reality, I can see their heads bopping through the soundproof plexiglass. I swear this booth feels like my sanctuary. “Uhhh”, the hardest grunt leaves my mouth as I finish my verse. I broke night writing the lyrics to this track, but I could care less; I know it’s all going to be worth it. Thump, I drop the heavy-duty headphones. A feeling of relief runs through my veins. Writing is definitely my passion; as my emotions disenthrall, my creativity spreads throughout my music. Unfortunately, I never had the chance to discover my talents until a few years ago.

Growing up wasn’t exactly a walk in the park for me. I had behavior issues that affected my grades and the way teachers perceived me. I wouldn’t say that I was the worst student, but certainly not the best. I guess you could say my poor actions stemmed from the absence of a “key-person” in my life; my mother. In 2008, my mom was sentenced to 12 ½ years in prison for 30 million dollars in bank fraud.

Sitting in the courtroom on the day of my mother’s trial, all I can remember hearing is each member of the jury call out, “GUILTY”. Tears bawled from my eyes immediately after hearing the verdict. It felt like my heart had been taken out of my chest; as I watched the pain in my mother’s eyes. My grandmother escorted me out of the courtroom. She held me tight and promised me that everything would be okay, but I knew it wasn’t going to be. I couldn’t fathom the thought of my mom not being there for important days like prom and graduation. It seemed the only thing I had left to channel my emotions was a pen, a pad and my mic.

What started out as just music, ended up being so much more. Writing rhymes was my healing process, helping to express feelings that I wouldn’t convey on an ordinary day. There were nights where I would write and completely break down because it touched deep into my heart. As the years flew by, my writing skills increasingly became better, opening doors for myself in unexplainable ways.

After realizing my musical talent and its potential, my grandparents invested in a recording studio for me, in effort to cut costly studio rates and travel fair. Armed and enabled to record at my own disposal; I began to create large bodies of work in a short period of time. One song in particular, entitled “He Don’t Deserve You” has become a true hit in my eyes. The song was inspired by a close friend who had ended an abusive relationship with her ex-boyfriend. Since the song was released, I’ve had dozens of women reach out to me to let me know, that my lyrics have helped them get through a rough time in their relationships. Some fans have even mentioned that they were grateful, for someone like me, who actually puts out music to uplift females instead of degrading them (like many of the Hip-Hop artists that are out today). It warms my heart to know that people suffering from the same problems that I once had (or witnessed) can actually relate to my music, regardless of race, or gender, or sex. Forget about a Grammy or an MTV Moon-man, that is the biggest accolade in my book.

One of the toughest times of my life was during my junior year of High School; I had so-called friends who I lost, along with a crazy break-up. Academically I was scoring higher than ever, however I felt yet again a huge void in my personal life, due to the sudden absence of my peers. Days, even weeks would drift away and I just wasn’t myself. I was transferred into an Honors English course; in Spring 2013, little did I know my life was about to take a sudden shift. I met a wonderful teacher by the name of Ms. Benson; she helped to unleash my inner-writer skills and showed me things that I once had no knowledge of. “Hello class! Today we’re going to be starting our college essays.” I used to jitter and shake just hearing the word college. “What!? I’m only a junior”, I accidently screamed out, but Ms. Benson didn’t take offense to my outburst. It seemed as if everyone was anticipating a reaction from me by the way the classroom suddenly went dead. She eased my dreadful thoughts, assuring me that it was not a difficult process. “Pull out a piece of paper and start jotting down every event that has heavily affected your life.” Now comfortable with the thought process, I began to jot down everything that I’ve been holding in for a while. My emotions spilled onto the paper, and flowed with pure generosity. My notes took up almost two full double-sided pages. In a matter of time, I was writing the introduction for my essay, then the body, and in an instant I was on my conclusion. Still far from perfect, I know I started a new chapter in my life.

Since the day I was introduced to a pen and a pad, and was instructed how to use it, my life has changed for the better. I no longer hold in my feelings or have to bear my pain alone. I now have a viable outlet to release. Tapping into my gift has given my life purpose. Not only does my music help me, it consoles my fans that escape through my lyrics. By listening to my message they know if I could overcome my hardships in life, they too can overcome! Watching the effect my music has on others is beyond inspiring and pushes me to move ahead. The love that I receive from my listeners pushes me to keep pursing my dreams, even during times when I feel like giving up. Regardless of good, bad or indifferent, one thing has proven to be a fact, music is indeed my passion and my “Mic is My Savior”!